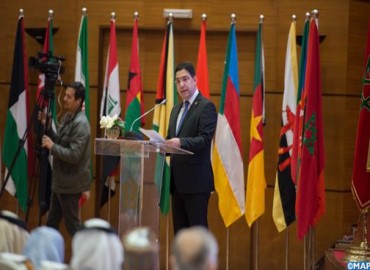 King Mohammed VI has called on Islamic States to adopt a new roadmap that would help capitalize on the Islamic World’s human and natural resources, implement a new proactive, future-oriented approach to development, develop appropriate strategies and plans for upcoming generations, and take actions to consolidate political stability, promote sustainable development, guarantee safety and food security, and protect the environment.

In a message to the participants in the commemoration ceremony of the 50th anniversary of the establishment of the Organization of Islamic Cooperation (OIC), held Thursday in Rabat, the Monarch called for “the adoption of a new roadmap that would help us capitalize on our human and natural resources, and bring about a paradigm shift in the quality of life indicators in our Islamic countries.”

Such a project, he said, requires the formulation of a new approach to development – one that takes into account the particularities of the global economic system and allows to draw inspiration from successful experiences which relied mostly on the development and training of human resources.

“The aim is to achieve a quantum leap in the economic, social and environmental sectors,” he underlined, adding that as inter-Islamic trade has doubled, “I support the development of economic blocs, as a prelude to establishing a free trade area for Islamic countries”, said the Monarch in his message read out by foreign minister Nasser Bourita.

Such an area should reflect the spirit of solidarity and pave the way for comprehensive, sustainable development, he said.

Dealing with the crises that are plaguing some Islamic countries, the Monarch deplored that these crises had had “serious repercussions at regional level, not only exacerbating the risk of division and horrible sectarianism, but also fueling extremism and terrorism.”

King Mohammed VI who stressed the urgent need to address the root causes that have led to this situation, which portends many risks, called on Islamic States “to act in good faith to resolve inter-Islamic disputes and adopt measures and mechanisms to shield our Organization against the risks of fragmentation and division.”

The Monarch similarly, called to stand up to the parties that are seeking to exploit the crisis in order to foment division or redraw the map of the Islamic world using, to that end, criteria that ignore identity as much as historical facts. “These parties have been trying to interfere with the destiny of nations and are putting global security and stability in jeopardy,” he insisted.

To help overcome this difficult situation, the Monarch advocated an accurate, objective diagnosis of the situation prevailing in the Islamic world, coupled with an in-depth, impartial assessment.

“With that in mind, we need to devise and implement appropriate development strategies and programs, making sure national particularities are duly taken into account, and observing the principles of solidarity and cooperation enshrined in our Organization’s Charter,” he said. The King expressed in this connection his confidence that “by adhering to the principles, values and goals that are the bedrock of the OIC, and by striving in good faith to strengthen the bonds of fraternity, cooperation and solidarity which exist between our peoples, we would provide our bloc with the resilience and efficiency needed to make it a compact, closely-knit body, whose components sustain one another.”

“In this regard, the consolidation of South-South cooperation based on trust, realism and mutual benefit, coupled with the proper use of the skills available and an exchange of experiences in various fields, would increase our productive capabilities and strengthen our economies, thus enabling us to fulfil our peoples’ aspirations for progress, prosperity and a dignified life.”

The Monarch argued that the celebration of the OIC 50th anniversary is an explicit call for greater unity and cooperation between OIC Member States – a call for active involvement in international political and economic decision-making to defend the interests of Islamic countries and peoples.

“It is an urgent plea for a proactive, future-oriented approach – a call for the development of appropriate strategies and plans for upcoming generations in order to rise to the major challenges ahead, foremost of which is action to consolidate political stability, promote sustainable development, guarantee safety and food security, and protect the environment, among other concerns,” King Mohammed VI said.