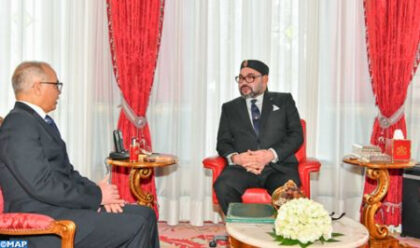 Morocco’s ambassador to Paris, Chakib Benmoussa, who has just been named head of the new ad-hoc committee for the development model, sketched out the mission of the task force and said its members, who will be unveiled in the coming days, will have to submit their report to King Mohammed VI by June 2020.

At a meeting with reporters at his place in Rabat Sunday, Benmoussa confirmed that he will remain stationed in Paris, where important deadlines are expected in 2020, including the France-Morocco high-level meeting to be held in the French capital. At the same time he will head the committee that will have a specific time-bound mission and made up of a small number of Moroccan experts, including expatriates.

The members of the multidisciplinary team will be chosen “for their sense of commitment, proven expertise and outstanding career,” Benmoussa told the reporters, adding that the experts will work “on a voluntary basis.” He explained that when the committee presents its report, within six to seven months, i.e. by the end of June 2020, it will be dissolved, unless its mandate is extended by the King.

As explained by King Mohammed VI in the speech where he announced the setting up of the committee, that the committee will not serve as a second government or be a parallel official institution, Benmoussa said the new taskforce will not give “guarantees” on the course of action of the government, nor on the role of political parties.

Its objective is to elaborate “with a sense of creativity (…) a new consensual social contract.” It will propose in this sense a series of “innovative programs and initiatives” developed on the basis of “methodology, implementation process, and feasibility studies,” he said.

The committee’s report will outline a ten-year outlook on structural transformations. These include the orientations outlined in the latest royal speeches, regarding primarily social and human issues (education, health, transportation, mechanisms of redistribution of wealth, economic growth), he said. The report will also address the major topical issues that concern the whole world, such as demographic and societal developments, topics relating to youth, the impact of the digital revolution, climate change or the rise of protectionism in the world.

The idea is to build “with humility”, on the basis of a “participatory diagnosis”, a “Moroccan-Moroccan model”, based on the country’s “institutional gains”, including “political stability” and “fundamentals of the Moroccan regime, Benmoussa said, insisting that “the terms and spirit of the Constitution will be respected”.

The committee will follow global benchmarks, but these will only be sources of inspiration, Benmoussa said, adding that besides the report, the Committee will make proposals that will be implemented under the supervision of adequate monitoring mechanisms.

The new ad-hoc committee for the development model is an advisory body, tasked with making proposals and suggestions to improve the development reforms and increase their effectiveness.

The committee is called to be totally impartial and objective, and to report on facts as they are on the ground, however harsh or painful they may be.