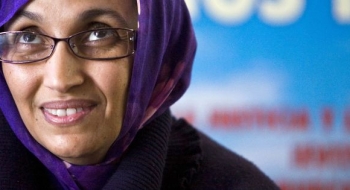 The pseudo Sahrawi activist, Aminatou Haidar, known for her collaboration with the Algerian intelligence services, is reportedly about to launch a campaign to defend the Kurdish cause and carry out actions in an attempt to secure the release of her friend and spiritual mentor Abdullah Ocalan.

As the news was being reported by a pro-Kurdish NGO based in Paris, the Turkish state TV channel TRT aired a reporting on Aminatou Haidar and a prize she was awarded recently. The TV channel is seemingly ignoring that Mrs Haidar, one of the fervent lobbyists of the Polisario, is regularly used by the Algerian intelligence services to serve untold goals.

Abdullah Ocalan, the “Lion of Kurdistan” and historical leader of the Kurdish rebellion and the Kurdistan Workers’ Party (PKK), has been handed life sentence, in 1999. Since then, he has been detained in Imrali-Prison island, not far from Istanbul, a prison similar to the famous former Alcatraz penitentiary in San Francisco Bay.