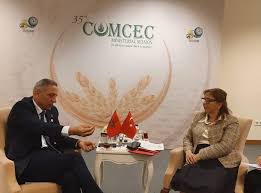 Morocco seeks to rebalance its FTA with Turkey

The deepening trade deficit with Turkey and the increasing complaints of Moroccan enterprises have finally pushed Morocco’s trade and industry minister Moulay Hafid El Alamy to ask for a rebalancing of the Free Trade Agreement with Turkey.

Speaking in Istanbul, the Moroccan minister told his Turkish peer, Ruhsar Pekcan that Morocco wants a review of the FTA. Moroccan media reported that a bilateral commission is being set up to examine means to rebalance trade between the two countries.

The Moroccan minister, who was in Istanbul to take part in an OIC trade meeting, also highlighted the imbalance in trade between the two countries and its repercussions on Moroccan enterprises.

The commission will have the task of examining the flaws of the current FTA and identifying Moroccan sectors with export potential as well as the promotion of Turkish investments in the Moroccan industrial fabric.

Complaints by Morocco’s textile and retail enterprises have been increasingly audible recently asking the government to reconsider its FTAs notably with Turkey.