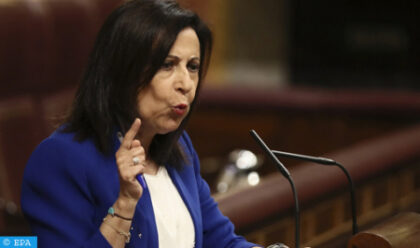 Spanish Minister of Defense, Margarita Robles, stressed on Thursday that the risk of terror attacks against Spanish nationals in the Tindouf camps in Algeria is “imminent”.

“This is a real threat confirmed by the foreign intelligence services operating in the region,” the Spanish minister said in an interview to the private radio station “Cadena Ser”, adding that Spanish citizens in the area have been informed.

“The risk of terrorist attacks in these camps is imminent and we are very concerned about this alarming situation,” Robles pointed out.

The Spanish Foreign Ministry, on Wednesday, released a travel warning, recommending Spanish travelers to show “extreme caution” throughout Algeria and to avoid trips to some areas, including the Tindouf camps and Algeria’s borders with Mali, Niger, Libya and Mauritania.

The warning was issued, the ministry said, because of “the growing instability in northern Mali” and “the increased activity of terrorist groups in the region” that could affect security in the whole area.

The warning notice recalled that there is a high risk of kidnappings and terrorist attacks throughout the country.

Algeria is not a common destination for Spanish tourists, but some NGOs organize solidarity trips to the Tindouf camps.

Spanish daily El Pais, which relayed the warning, said intelligence services operating in the Sahel have reported the direct involvement in the preparation of the “imminent attacks” of the terrorist Islamic State in the Great Sahara (EIGS), led by Adnan Abu Walid al Sahrawi, a former member of the Polisario separatist movement.

According to intelligence services, “an attack is in advanced state of preparation (…) especially against Spaniards,” El Pais said.

Several analysts and think tanks have repeatedly warned that the Polisario-run Tindouf camps have become breeding grounds for terrorist organizations to recruit new members among the disenfranchised Sahrawi youths, a ticking time bomb that may go off at any time.