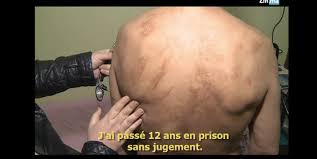 Demonstration in Vitoria in solidarity with victims of Polisario’s abuses

A demonstration in solidarity with the victims of the serious violations of human rights committed by the polisario against Sahrawi populations sequestered in the Tindouf camps in the Algerian territory, was held on Saturday at the Constitution Plaza in Vitoria Gasteiz, in the Basque Country.

The demonstration was organized as part of a series of activities and meetings held throughout last week by a delegation of civil society activists from the Moroccan southern provinces.

The delegation members, all victims of abuses they suffered in polisario jails, held meetings with several officials of the Autonomous Region of the Basque Country, MPs, and representatives of the local and regional authorities. They briefed their interlocutors on the gross violations of human rights committed by the polisario in the Tindouf camps, and showed them evidence of the torture they were inflicted when detained by the Polisario militias, as the stigma of the torture is still visible on their bodies.

The Moroccan delegation handed their interlocutors a file outlining atrocities perpetrated by the Polisario Front in the Tindouf camps and detailed information on forced disappearances, as well as photos that evidence cases of torture. Documents in the case file also listed the names of the perpetrators of human rights violations. Several Polisario leaders featured on the list.

The Saturday demonstration provided a new opportunity to denounce these violations and to demand justice for the victims.

Besides the ordeal of the detainees, the protesters condemned the inhuman and degrading living conditions in the Tindouf camps as well as the diversion of international humanitarian aid destined to the sequestered population, used as a bargaining chip by the separatist front’s leaders to feed their bank accounts in different European countries.

The protesters urged the international community to take action to put an end to the plight of the camps’ population and to support their claims to enjoy basic human rights.

The participants in the demonstration also stressed the need to prosecute the Polisario torturers for the atrocities committed against the camps population and to unveil the fate of the disappeared.

For the president of the Association of the missing persons at the hands of the polisario (APDP), Dahi Aguai, who had been himself tortured in the Polisario’s jail, this demonstration aims at denouncing the crimes and abuses committed by the polisario.

“We are here to make the voices of Polisario’s victims heard and to ensure that their cause is known and recognized by the Spanish public in general and that of the Basque Country in particular,” Dahi told MAP, calling for legal action against the torturers of the Polisario, many of whom are wanted by Spanish authorities.

For his part, the president of the coordination of the Moroccan community established in the Basque Country, Ait Oukdim Mustapha, said the demonstration, besides denouncing the Polisario’s serious abuses in the Tindouf camps, also reaffirms the Moroccanness of the Sahara and attachment to Morocco’s territorial integrity.

Member of the Memory & Justice Association, Mohamed Mokhtar Al Alyin, himself victim of Polisario abuses, said the victims want to make their voice heard and want to inform the Spanish public in general and that of the Basque region in particular about the dire situation in the Tindouf camps. The Polisario’s victims seek help to obtain reparation and Tindouf camps population want to recover their rights, he said.

The president of the association of the Muslim community of San Sebastian, Mamoun Srassi, for his part, stressed the importance of organizing this kind of initiatives in solidarity with the victims of the polisario, in order to reveal the sufferings of the Sahrawis sequestered in the Tindouf camps and to challenge the international community about their situation.