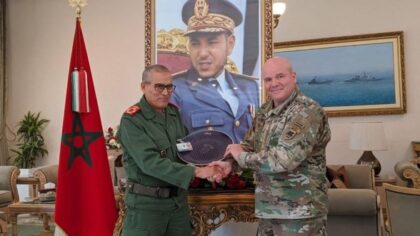 The Commander of US Ground Forces for Africa (Africom), Major-General Roger Cloutier, has recently visited Morocco for a meeting, in Agadir, with Commander of the Southern Zone, Inspector of Infantry Major General Belkheir El Farouk.

This meeting between the two top Moroccan and American officers is part of the preparations for the 2020 edition of the combined Moroccan-American drills, African Lion, scheduled for March and April next year.

“FAR-Maroc”, a website specialized in reporting on the Moroccan Royal Armed Forces activities, which reported the meeting between the two top officers, said the 2020 edition of the African Lion drills will be “the most important” of this annual exercise of unparalleled scale in the African continent.

Major General Roger Cloutier had said in an earlier statement that he had been “very impressed” by the level of professionalism shown by the Moroccan armed forces throughout last year’s exercises (March 16 to April 7). Highlighting the “exemplarity” of the partnership uniting the two armies, he had vowed that the two sides would continue to work together and prepare African Lion 2020 according to a solid vision.

African Lion is an annually scheduled, bilateral US and Moroccan sponsored exercise designed to improve interoperability and mutual understanding of each nation’s tactics, techniques and procedures.

The drills, sponsored by the US Africa Command (AFRICOM) and the US Army Africa (USARAF), involve various types of training, including command post, live-fire and maneuvering, peace keeping operations, an intelligence capacity-building seminar, aerial refueling/low- level flight training, as well as medical and dental assistance projects.

Besides Morocco and the USA, military personnel from other countries, including Egypt, Mauritania, Senegal, Tunisia, Belgium, Canada, France, Germany, Italy, Spain , the United Kingdom, Australia, and Portugal are invited to take part in the African Lion exercise.