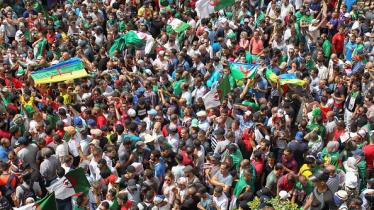 Human Rights Watch has called on the Algerian authorities to release immediately and unconditionally the peaceful activists and respect the rights to free speech and assembly of all Algerians.

“This spate of arrests looks like part of a pattern of trying to weaken opposition to Algeria’s interim rulers and their determination to hold presidential elections on December 12,” said on Thursday Sarah Leah Whitson, HRW Director for MENA region.

A popular protest movement started in February to oppose President Abdelaziz Bouteflika’s plan to seek a fifth term, and has maintained its momentum with huge demonstrations every Friday calling for the ouster of the existing government and a more pluralistic and inclusive framework to prepare for free elections.

The authorities initially tolerated the protests, but beginning in June started arresting groups of protesters, including at least 40 for brandishing the Amazigh flag, a symbol of that ethnic group that, until then, had been tolerated.

According to HRW, the Algerian regime prosecuted some prominent Hirak figures such as Lakhdar Bouregga, a veteran of Algeria’s independence war, starting in June, and have intensified the crackdown since September.

The authorities have filed charges against the movement’s leaders such as threatening state security, national unity, and territorial integrity, calling for an illegal gathering, and undermining army morale. At least 13 of these leaders are in pretrial detention while others are free pending trial.

Since Bouteflika’s resignation, one of his appointees, Ahmed Gaid Salah, 79, the army chief of staff and deputy defense minister, has been widely considered Algeria’s leading decision-maker and de facto ruler.

North Africa Post's news desk is composed of journalists and editors, who are constantly working to provide new and accurate stories to NAP readers.
NEWER POSTAfrica United behind Moroccan Mohamed Boudra for UCLG Presidency
OLDER POSTBank of Algeria has a new Governor