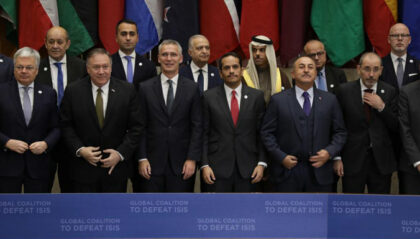 Morocco, one of the major international players in counterterrorism, took part in the extraordinary meeting of the Global Coalition to Defeat ISIS held Thursday in Washington to discuss next steps in the joint campaign to degrade and defeat ISIS.

The gathering, which was opened by Secretary of State Mike Pompeo, comes following the death of Abu Bakr al-Baghdadi. It focused on recent developments in northeast Syria and their impacts on the stability and security of the region.

Morocco was represented in this small group meeting by Fouad Yazourh, Head of bilateral relations & regional Affairs at the Ministry of Foreign Affairs.

Participants reviewed the Turkish incursion into northeast Syria, the Russian & Syrian interventions into that area, the status of US partners in the fight against ISIS and the global coalition strategy for continued fight against ISIS in the post-liberation era.

NATO Secretary General Jens Stoltenberg who participated in the meeting stressed that all Allies agree on the need to safeguard the gains made by the Coalition, and support UN-led efforts to achieve a sustainable political solution in Syria. He further pointed to NATO’s training missions in Iraq and Afghanistan as important contributions in the fight against international terrorism.

Set up in 2014 by the United States, the coalition remains determined to prevent a resurgence of ISIS in Syria and Iraq and continues fighting ISIS remnants and its global ambitions. Its members regularly meet to coordinate and enhance combined efforts to counter ISIS.

The terror extremist organization presents a global terrorist threat, which has recruited thousands of foreign fighters to Iraq and Syria from across the globe and leveraged technology to spread its violent extremist ideology and to incite terrorist acts.

According to UN Security Council Resolution 2170, “terrorism can only be defeated by a sustained and comprehensive approach involving the active participation and collaboration of all States…”