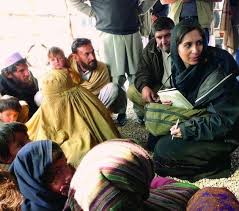 The Moroccan-born journalist to a Moroccan father and a Turkish mother will receive the award on January 14, 2020, at the Los Angeles Tolerance Museum, the US-based Center announced Monday in a statement.

The center explained that Souad Mekhennet is today without question, one of the foremost journalists reporting on issues of extremism, radicalization, terrorism, and national security. She is exceedingly well-respected for her subject matter expertise, journalistic integrity, objectivity, dedication to the truth, unparalleled access to otherwise inaccessible sources, and above all, her undying courage. The SWC is proud to recognize the achievements of this amazing journalist.

“Ms. Mehkenet has reported in real-time from the Arab Spring, interviewed murderous ISIS leaders, and became the first Muslim person to play a pivotal role in solving the case of a major Nazi War Criminal who found safe haven in Egypt,” Abraham Cooper said.

“While others bemoan the state of the world, Souad Mekhenen has braved arrest, a gun to head, threats of rape and violence to bring to light the rarest commodity of all—the truth—from the frontlines of breaking news across the Middle East and beyond, he added.

The center’s statement described Souad Mekhennet’s work as accurate, objective, and nuanced. It doesn’t paint a simple picture but rather portrays things as they are – complex, complicated, and at times, messy.

The statement recalled as an instance that when she was covering the Arab Spring, she provided “nuanced, unbiased reporting, writing about the involvement of foreign governments on all sides of the movement.” Also, when many journalists took the side of the protesters, Ms. Mekhennet did not, despite the fact that she had been imprisoned by government authorities for her reporting, the statement added.

The journalist who has previously worked for the New York Times and the Herald Tribune, among others, is co-author of “Nazi Eternal: Mauthausen in Cairo, the relentless pursuit of Dr. SS Aribert Heim”, a survey published in 2014 , on Aribert Heim, the Nazi “death doctor” of the Mauthausen camp considered one of the most wanted war criminals in the world.

Ms. Mkhennet said she was “grateful” to the Simon Wiesenthal Center for the honor and recognition of her journalistic contributions and books. “I see this distinction as an additional responsibility for furthering and deepening my reporting on people who act hatefully towards other human beings,” she told MAP.

“It is also a particularly special honor for me and humbling me to name myself the first person of Muslim origin to have played a central role in the resolution of the case of a great Nazi war criminal”, she said. “In order to cope globally with such crimes, we need to understand how people have aligned themselves with dehumanizing ideologies and acted accordingly,” added Souad Mkhennet, who grew up in Germany where she learned of the atrocities committed by the Nazis against the Jews and who also remembers her years spent in Meknes at her grandparents’ place where she was told how the late King Mohammed V protected the Moroccan Jews in these dark times of European history.

Souad Mekhennet is an international correspondent and member of the team of the “National Security Desk” of the Washington Post. She covered topics related to the rise of extremism and terrorist groups like Al Qaeda and Islamic State in Europe, the Middle East and North Africa.

She has already won several awards and distinctions for her research on the ground in Iraq, Afghanistan, Algeria and Libya, but also as a writer inspired by her investigations in radical circles. First Muslim woman to receive the prestigious Daniel Pearl Award in 2017, for courage and integrity in journalism, Ms. Mekhennet is the author of four books, including the international bestseller “I Was Told To Come Alone: My Journey Behind the Lines of Jihad”, in which she reviews her often perilous investigations of terrorism around the world.