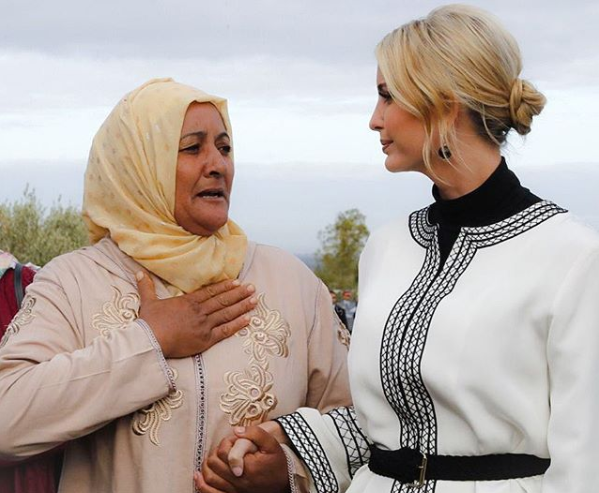 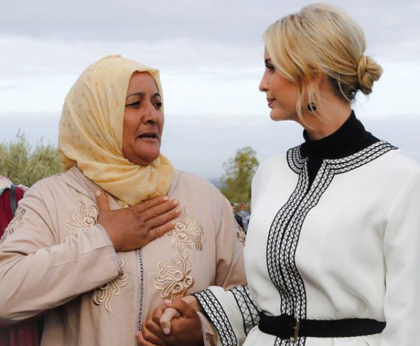 Daughter and advisor to US President Donald Trump, Ivanka Trump, visited Thursday an olive grove, a Millennium Challenge Corporation project, in Sidi kacem, on the outskirts of the capital Rabat, where she launched a campaign to support women’s ownership of soulaliyate lands, as part of the Women’s Global Development and Prosperity (W-GDP) Initiative.

During this field visit, Ivanka Trump learned about women’s access to soulaliyate (collective) lands, a project initiated under the supervision of King Mohammed VI and considered a major priority of the W-GDP to strengthen women’s empowerment in Morocco.

Before her trip to Morocco, Ivanka Trump has hailed in tweets taken strides under King Mohammed VI to promote gender equality.

In support to the soulaliyate lands melkisation (ownership) by women, the MCC Compact works to issue land titles for about 67,000 hectares of collective land, which will benefit about 56,000 beneficiaries in the Gharb and Al Haouz regions.

While in Sidi Kacem, the US President’s adviser chaired a signing ceremony of two agreements between several partners that will provide over $6 million to local female Moroccan farmers.

The accords cover measures to support the melkisation operation through training in agricultural production, financial management and the fight against illiteracy.

The two agreements back the second and third pillars of the W-GDP initiative through economic activities targeting women in relation to agriculture. They also aim to create an enabling environment for women to access property rights.

She commended the MCC Compact team for its efforts to implement the W-GDP initiative in Morocco, and welcomed the adoption by the Moroccan parliament of new laws on soulaliyate lands.

Millennium Challenge Corporation CEO Sean Cairncross said he is proud of MCC’s contribution to the W-GDP initiative, particularly in Morocco, noting that the MCC works to promote the empowerment of women for development.

The United States supports the Moroccan government in this regard, Cairncross said, stressing MCC’s commitment to poverty reduction in rural areas.

Later Thursday, Ivanka and Cairncross were to attend in Rabat a roundtable discussion with female community leaders and MCC Compact beneficiaries.

W-GDP is based on three pillars: support for women to develop their capacities with a view to greater profitability; access to credit and technical assistance for business creation; and the promotion of women’s working environment through changes in attitudes and laws.