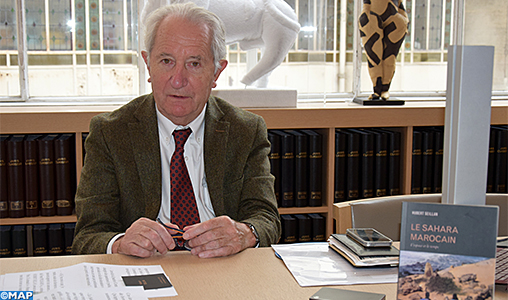 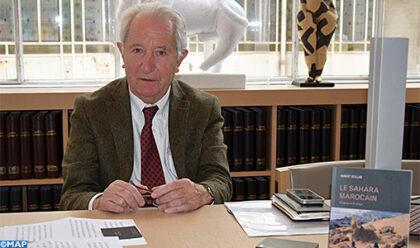 French author, lawyer and editor Hubert Seillan analyzes in a new book, “Moroccan Sahara: Space and Time,” how, historically, geographically, and sociologically, the disputed Sahara territory is and has “been Moroccan” for centuries and how this Atlantic Sahara has always been an coveted space.

The author makes it clear throughout his book, issued by “La Croisée des Chemins” publishing house, that the disputed “space” is Morocco’s and that the ongoing Sahara conflict is a “colonial invention.”

Seillan explains that Morocco has “for 1400 years been perceived as a spiritual and political authority” in the Sahel-Sahara regions and that the cultural and social links between Moroccans in the South and Moroccans in other parts of the country are so evident from history and social interactions that “the idea of a distinct Sahrawi identity is absurd.”

In an interview with Moroccan news agency MAP, the French author explained his book’s foundational ideas substantiating the “historical and sociological Moroccanness of the Sahara” and underlined that the Sahara conflict is the “invention” of Algeria’s regional aspirations and Spanish colonization to challenge Morocco’s legitimate claims on the “Saharan space.”
Debunking any criticism that he is pro-Morocco in his analysis, Hubert Seillan said “I simply observed what I perceive as a homeland, and there are so many throughout Morocco. That of Western Sahara of course has its own specificities but at the same time it is profoundly Moroccan and has been so for centuries.”
In the first chapter of his book, the author explained that the separatist front is losing relevance and weight and that its ideological support and personnel supplies will eventually dry up.

“Polisario no longer exists effectively. It is divided. People in Tindouf want to go back home but they are being prevented from doing so,” he explained.

The author who is upbeat as to the settlement prospects for the region, argues in chapter 2 that the issue is coming to an end and that a new California is emerging in the Sahara, a territory that meets all the criteria for development.

“I see the future of the Moroccan Sahara under the best auspices, since I see all the beginnings of a new California on the economic and social level,” he states optimistically.