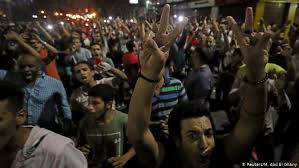 UN human rights experts have called on Egypt to protect people’s rights to freedom of expression, peaceful assembly and association, after a wave of arrests targeting protesters, journalists and human rights defenders.

The experts’ comments follow the response by Egyptian security forces to a series of peaceful protests across the country on 20 and 21 September 2019, in which demonstrators called for President Abdel Fattah al-Sisi to resign and for an end to government corruption and austerity measures, the UN news center said.

“We express our concerns at the heavy-handed response by Egyptian security forces against the protesters and others,” said the Special Rapporteurs from Geneva on Monday.

The Special Rapporteurs and Working Groups are part of what is known as the Special Procedures of the Human Rights Council.

The authorities have reportedly used live ammunition, rubber bullets and tear gas against demonstrators, and have reportedly arrested at least 3,000 people since the start of the protests. Those detained include people participating in the demonstrations, bystanders, journalists, academics, lawyers and prominent human rights defenders. The majority are facing charges and many have allegedly been denied legal representation, the experts pointed out.

“The use of counter-terrorism legislation to target people expressing dissent and seeking to promote and protect human rights is never compatible with human rights law.”

The experts called on the Government of Egypt to immediately cease its campaign of persecution against protesters, human rights defenders, journalists and anyone else with divergent opinions, and take all measures to guarantee a safe and enabling environment for all Egyptians, independent of their political opinions.

“The Egyptian authorities must investigate all alleged human rights violations, and remedy any abuse faced by individuals. We also call on the Government to find ways of engaging with the population about their legitimate grievances.”

The UN experts have previously expressed their concerns to the Government of Egypt and are continuing to urge the authorities to engage in genuine dialogue with protesters, human rights defenders and other dissenting voices.