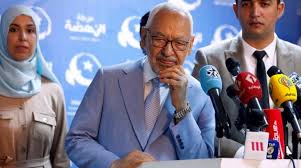 Tunisian moderate Islamist party Ennhadha is on the verge of appointing its leader Rached Ghannouchi as the future Prime Minister following this month legislative elections dominated by the movement, Tunis Webdo reports.

The Choura Council of the party deems Ghannouchi fit and suitable for the job. The leader himself however has not expressed any desire to hold the position.

The party of Rached Ghannouchi won 52 of the 217-seat parliament in the October 6 legislative election. The victory gives it the constitutional right to lead the parliament and appoint a Premier. However, Ennahda’s seats are well short of the 109 needed to govern.

Therefore, the formation of a cabinet will be no easy task as Ennahda will have to strike deals with other parties represented in the parliament.

These are the recently formed Qalb Tounes (Heart of Tunisia) party of media magnate Nabil Karoui which came second with 38 seats, followed by the Democratic Current party with 22, People’s Movement party with 16 and Long Live Tunisia party with 14.
Other Tunisian parties won the remaining 75 seats.

If appointed, Ghannouchi will work with newly elected President Kais Saied, supported by Ennahda members during the October 13 runoff.

In 2016, Islamist Ennahda party had announced separation of religious activities from Politics, saying the change was made in a new context, with a new Tunisia fully immersed in democracy.

“Tunisia is now a democracy. The 2014 constitution has imposed limits on extreme secularism and extreme religion,” Ghannouchi had then told the media, insisting that his party wants religious activity to be completely independent from political activity.

“We are leaving political Islam and entering democratic Islam. We are Muslim democrats who no longer claim to represent political Islam,” Gannouchi had said.

“This is good for politicians because they would no longer be accused of manipulating religion for political means and good for religion because it would not be held hostage to politics,” he had added.

The party founded in 1989 has been active in Tunisia’s post revolution era. After winning first democracy elections organized after the ouster of former President Ben Ali, the party came under fire for Islamizing the country long known as the most secular Arab country. It then lost 2014 parliamentary election to the secularist Nidaa Tounes party of late President Beji Caid Essebsi.