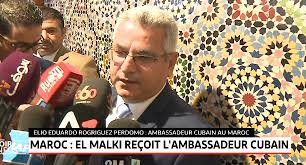 Cuba to open an embassy in Rabat soon

Cuba plans to open an embassy in Morocco, two years after the two countries re-established their diplomatic relations.

The announcement was made by Cuba’s ambassador to Morocco, Elio Eduardo Rodriguez Perdomo, at a meeting in Rabat Monday with speaker of the House of Representatives.

Ties between the two countries were normalized two years ago with Havana appointing a non-resident envoy to the North African country.

The Cuban ambassador to Morocco presented his credentials in August 2018. However, he has been living in Paris, France, since his appointment.

Morocco also appointed an ambassador to Cuba in the person of Boughaleb El Attar who presented his credentials to President Miguel Diaz-Canel end of June 2018.

Elio Rodriguez Perdomo indicated that “all conditions are met for both countries to further boost their bilateral relations including the opening of the Cuban embassy.”

Perdomo also announced that his country will nominate a new resident ambassador to Morocco when the embassy opens.

According to press reports, Perdomo will be replaced by Javier Domokos Ruiz, former Cuban Consul General in Toronto.

Ruiz is reportedly expected in the kingdom to visit the facility to house the permanent mission and his own residence.

The Cuban diplomat also indicated that the two countries agreed to laser their mutual actions towards the African continent.

Perdomo’s talks with the Speaker of the House of representatives actually focused on means to promote a Cuba- Morocco-Africa tripartite cooperation.

The Cuban non-resident ambassador’s visit to rabat comes only two weeks after the Moroccan and Cuban Foreign Ministers met on the sidelines of the UN 74th General Assembly, in New York.

Relations between Morocco and Cuba were frozen for almost 37 years because of Havana’s siding with the Algeria-backed polisario separatist front.

On April 21, 2017, the two countries decided to re-establish their diplomatic relations, following a visit of King Mohammed VI to the Caribbean country.