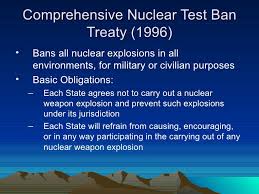 Morocco called on Tuesday in New York for the immediate entry into force of the Comprehensive Nuclear Test Ban Treaty (CTBT) to put an end to the threats weighing on international peace and security.

The persistent threats from the various nuclear tests and the serious danger they represent for humankind should incite all countries to work together for nuclear disarmament and non-proliferation, said Morocco’s delegate at “Article XIV Conference” held on the sidelines of the ongoing 74th UN General Assembly.

Since 1999, this biennial conference has had the challenging task of finding ways to facilitate the Treaty’s entry into force. Adherence to the CTBT is nearly universal, with 184 States having signed it and 168 having ratified it.

However, despite near-universal adherence, the CTBT has not yet entered into force. For the treaty to come into effect, all 44 nuclear-capable states need to sign and ratify it, but some, including the US, China, India, Iran, Israel, North Korea and Pakistan, have yet to do so.
The CTBT bans all nuclear explosions everywhere, by everyone, and for all times. The CTBT has established an International Monitoring System (IMS) to ensure that no nuclear explosion goes undetected.