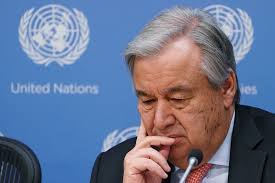 UN Secretary-General Antonio Guterres is preparing to appoint a new personal envoy for the Sahara in replacement of German Horst Köhler, 76, who resigned from his post on May 22nd 2019 “for health reasons”.

According to diplomatic sources cited by le360.ma web site, the UN chief has not so far submitted any name to the parties: Morocco, Algeria, Mauritania and the Polisario.

According to UN sources, it is during this period that the UN Chief is expected to appoint his new personal envoy for the Sahara so that the Security Council will be able to adopt its Sahara resolution end of October.

It is on the basis of the recommendations of Antonio Guterres and the new UN Sahara envoy that the Security Council will adopt a resolution on the MINURSO mandate and the Sahara issue.

The latest Sahara resolution 2468, adopted by the UN Security Council with a large majority, had extended the MINURSO mandate for six months and called on the four parties to the Sahara conflict to show “political will, realism and spirit of compromise” to move forward in the negotiations to reach an “enduring political solution based on compromise”.

The resolution, which was drafted by the US, the penholder, welcomed, the “serious and credible Moroccan efforts to move the process forward towards resolution” of the Sahara regional dispute.

The Security Council resolution described Algeria as a main party in the UN process, did not make reference to the “principle of self-determination” and reiterated the pre-eminence of the Moroccan autonomy plan in the political settlement process of the Sahara conflict, dealing a hard blow to the Polisario and its Algerian supporters.