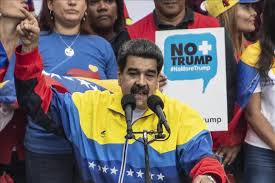 The Polisario has once again evidenced its lack of clear-sightedness and its misconception of geopolitics when it joined a group of socialist countries that reject President Donald Trump’s policy towards President Nicolas Maduro’s Venezuela.

Actually, the separatist front’s representative in Cuba signed at the embassy of Venezuela in Havana an anti-trump petition, part of the “No to Trump” campaign orchestrated by Maduro.

The move would likely irk the US administration, especially that Washington already views unfavorably the close relations the Algeria-backed front has with Maduro’s regime and with Cuba.

The signing of the petition comes at a time when the Polisario Front is wary of US moves and its position on the Sahara conflict, especially that the US is the penholder of UN Security Council resolutions on the Sahara and is rejecting the establishment of a new state in North Africa.

The Wall Street Journal in a recent long article on the Sahara issue pointed out that “The US has made it clear that Washington won’t support a plan that leads to a new African nation.”

The security situation in the region makes the conflict an urgent matter, wrote the author of the article Dion Nissenbaum.

The non-settlement of the Sahara issue poses a threat for peace and stability in the Sahara-Sahel region and US policymakers are fully aware of the urgency to settle the regional conflict, the journalist noted, adding that the Polisario is a Marxist group linked to regional terrorism, so settling the Sahara conflict is an urgent matter to preserve the security in the region.

In a video posted on the daily’s website along the article on the Sahara issue, the journalist surveys the genesis of the Algeria-backed separatist movement of Marxist obedience and how its connection with terror groups roaming in the Sahel-Sahara threatens peace and stability in the whole region.

US policymakers are aware of this emergency, as failure to solve the issue could harm “one of the few remaining pockets of stability in North Africa, creating new opportunities for Islamic State or al Qaeda to expand,” the journalist underscores.

The administration of President Donald Trump that is facing up the terror threat on several fronts, is attentive to the situation in the Sahara and Sahel region. The White House, being aware of the dangers posed by the SADR [the so-called republic self-proclaimed by the Polisario], is determined to end this conflict.

The Polisario’s alignment with the signatories of the petition against Trump demonstrates the acquaintances of the separatist front with Cuba and the Maduro regime and exposes its confusion after the revelations made by The Wall Street Journal.

The US administration has been focusing on economic and diplomatic pressure against Maduro, including imposing sanctions on him, his top officials and several governmental departments as it seeks to increase pressure on Caracas. Earlier this month, it froze all assets of the Venezuelan government.

The No More Trump campaign seeks to collect 13 million signatures and will run until it is submitted to the UN General Assembly meetings where Venezuela will urge Secretary-General Antonio Guterres to make a statement on White House’s sanctions.