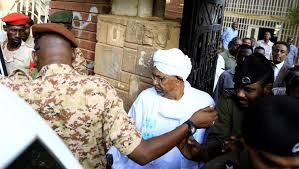 Former president of Sudan Omar al-Bashir is appearing this Monday before court in the capital Khartoum where he is facing corruption charges.

Bashir was forced out of power in April when security forces withdrew their support for his regime after months of popular protests. He was charged in June with illicit possession of foreign currency and accepting gifts illegally.

According to press reports, an investigator told the court Bashir has admitted to receiving $90m in cash from Saudi royals.

Bashir was also charged in May with incitement and involvement in the killing of protesters. Prosecutors also want him questioned over suspected money laundering and terrorism financing.

Some analysts say Bashir’s trial is a mere manoeuver not to hand him to the international criminal court in The Hague, which has accused him of criminal responsibility for war crimes, crimes against humanity and genocide following the killing, maiming and torture of hundreds of thousands of people in the region of Darfur.

The United Nations estimated that between 200,000 and 400,000 people died in the conflict, with a further 2.7 million displaced.

The trial comes as Sudan’s military rulers and protest leaders begin to implement a landmark deal that is meant to pave the way for civilian rule.

One of Sudan’s top generals, Mohamed Hamdan Dagalo, who is deputy head of the military council, and representative of the opposition Alliance for Freedom and Change umbrella group, Ahmad al-Rabie, formally signed the agreement on Saturday.

The power-sharing deal, brokered by the African Union and Ethiopia, creates a joint military and civilian sovereign council to rule for a little over three years until elections can be held.

The sovereign council would include five members selected by the TMC, five picked by the main opposition coalition, and one agreed upon by both sides.

Under the agreement, a military leader would head the 11-member council for the first 21 months, followed by a civilian leader for the next 18.

The agreement also provides for a 300-member legislative assembly to serve during the transitional period, and a cabinet of technocrats, to be appointed by the activists and the legislative body.