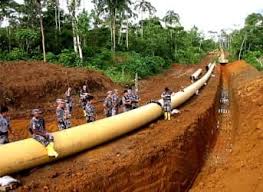 South Sudan and Kenya seek to boost their cooperation in the oil sector.

Chuang has been quoted as saying that to channel crude oil from Kenyan oilfields to the international market, there is need for cooperation between South Sudan, Kenya and Uganda and probably DRC.

Kenya announced last week that it made its first ever oil export of 200,000 barrels since the discovery of crude oil in the east African nation in 2012.

In 2012, landlocked South Sudan made a deal with Kenya to build an oil pipeline to connect the conflict-torn country to the Kenyan port of Lamu in a bid to reduce the country’s over-reliance on its northern neighbor, Sudan, for its oil export.

Officials expect the pipeline to transport between 700,000 barrels and 1 million barrels of Southern Sudanese crude per day.

It is to be recalled that Kenya on Tuesday announced the appointment of Musyoka as Kenyatta’s special envoy to Juba to help shore up efforts to achieve durable peace and stability in the world’s youngest republic.