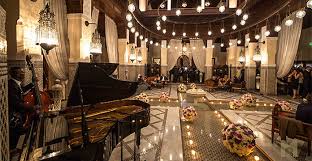 The luxury, refinement, elegance and excellence of the Royal Mansour, Marrakech, earned him a new prestigious award.

Two other hotels in the Ochre city were ranked in the top ten. These are La Mamounia and the Four Seasons Resort Marrakech, which came in the fourth and seventh spots respectively.

The Royal Mansour palace’s new distinction is however not a surprise as the hotel, which was listed by Forbes in the top 50 ultimate luxury, seems to have found the recipe for success.

Explaining why the first spot in the category went to the Royal Mansour, Travel + Leisure says the resort makes every guest “feel like nobility.” The hotel offers 53 private, multistory Riads where staff enter and exit discreetly via underground passageways.

In this unique palace, one of those rare places around the world where excellence is a watchword, Moroccan cultural heritage is at its peak, the magazine says, adding that everything from traditional architecture, to lush gardens, to the refinement of decoration, evokes a subtle and elegant marriage between tradition and modernity.

The design of the hotel is a real ode to the medina of Marrakech, whose place Jemâa El Fna is located a few steps. In the corridors of the hotel as in the alleys of the old town, we stroll, captivated by the beauty of the place and the timeless atmosphere that emanates from it.

“Hotels were rated on their facilities, location, service, food, and overall value. Properties were classified as city or resort based on their locations and amenities,” Travel + Leisure wrote.

The Kasbah Tamadot in the Atlas Mountains of Morocco ranked first in this category for its “charming getaway where internationally sourced antiques fill the interior, and roses, cacti, and cherry trees colors the gardens” as well as its staff. Travel + Leisure learned the hotel makes it a point to hire employees from nearby Berber villages.

In the “10 best cities in Africa and the Middle East” category, Marrakesh and fez took third and fifth spots respectively.

Travel+Leisure said the criteria for choosing the top cities were “very specific.”

“A strong sense of historical and cultural identity is crucial, as is beautiful scenery. The food and shopping scenes are important, too. And the hotels, of course, must be world-class,” the magazine says.

According to the magazine, the ranking is based on an annual survey that asks readers to weigh in on travel experiences around the globe and rate “airlines, airports, car-rental agencies, cities, cruise ships, destination spas, hotels, hotel brands, islands, tour operators, and safari outfitters.”