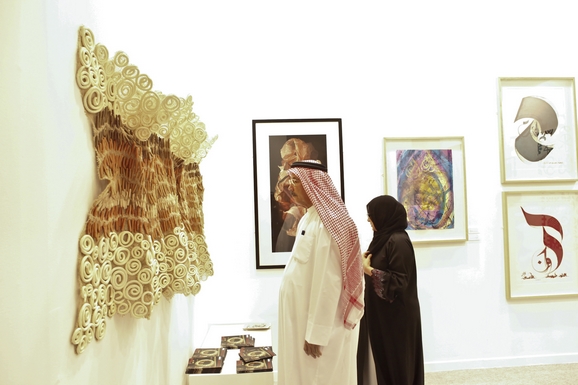 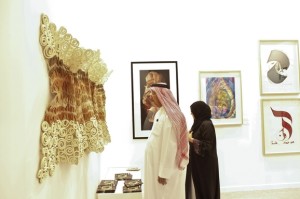 As the Dubai temperature was rising, the impatience of art enthusiasts could not be restrained. Festivities finally started on Tuesday March 19, with the Jumerah Patrons’ Preview. Art Dubai was launched. A champagne glass in hand, clichés were forgotten… The time of an exhibition.

In partnership with Abraaj Group, the seventh edition of Art Dubai gathered some 500 artists who displayed their works in 76 galleries. Participants from 29 different countries were numerous to rise to the call. Held at Madinat Jumeirah from March 20 to March 23, the event is “the largest showcase for artists from the Arab World” as put by fair director Antonia Carver.

In keeping with Art Dubai’s objective to enhance cross-cultural relations, West Africa was represented at the Marker, a curated platform dedicated to new pieces. Twenty artists from Ghana, Mali, Senegal and Nigeria presented artworks, expressing urban and social evolutions and their impact on the African society.

Sponsored by Cartier, the art fair started with the display of sets of jewels worthy of a Sheika. From the gemstone cut to its setting, privileged strollers admired the work of master craftsmen. The audience came forward and asked to see ornaments close up. Oscar Wilde once said ‘The only way to get rid of temptation is to yield to it…’ Fortunately some of the jewels were on sale.

Lovers of a more traditional definition of art flocked to the galleries exhibiting sculptures and paintings. Among the headliners, Belgian Win Delvoye displayed his meticulous work, impressive gothic steel sculptures previously seen at the Louvre museum of Paris. Indonesian Yudi Noor, renowned for the originality of his abstract collages, was present as an artist in residence.

Polemic was not excluded, as Kuwaiti-Syrian Shurooq Amin presented coloured paintings on the general theme of the condition of women. In a similar vein, Saudi Manal Al Dowayan displayed pictures of women dressed in burqas, reading behind bars.
Extrastruggle from Turkey exposed his vision of the Koran in his masterpiece, “When I awoke I realized I was in a rose garden”. The discrete reminder to religion gave expression to a moderate interpretation of Islam.

Incidentally, creations that could have been considered as too conceptual were notably absent from the displays. Was it because of caution or was it a response to a clear guideline? The question remains unanswered.

With deference to tradition, the fair program had a Ladies’ Day. Reserved for the exclusive access for ladies, exhibitions were closed for men.
The event featured among other activities conferences that brought together diverse personalities from the world of art. Debates about Mena – Middle East Nervous Anxiety – invest “words, terms, clichés and misunderstandings that proliferate in the art world and beyond” attracted scores of participants.

A set of white donkeys arranged in military formation was the toast of the art fair. Their creator, young Pakistani artist Ehsan ul Haq, beyond a cynical insight, remained confident about the evolution of Art Dubai. In the same spirit, Oscar Guardiola, law lecturer and prominent guest of Global Art Forum, astutely argued that MENA stopped attending world references, to create new ones.