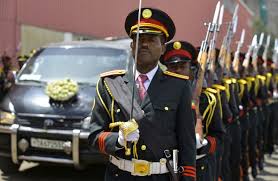 Ethiopia: over 250 arrested over foiled coup

In Ethiopia, nearly 250 people have been arrested in Addis Ababa and the main city of Amhara region since a coup attempt was foiled, state TV reported on Thursday.

The state-run Ethiopian Broadcasting Corporation did not give any more details on who was arrested or when. But a political party based in the northern region – the National Movement of Amhara (NAMA)- earlier said 56 of its members had been detained in Addis Ababa on Wednesday.

Since its founding last year, NAMA has emerged as a rival to the Amhara party in the ruling coalition, which has held power in Ethiopia since 1991. NAMA has condemned the weekend violence and denies any link to it.

The country held a memorial on Tuesday for the army chief of staff who was assassinated along with four other senior officials during a failed coup bid at the weekend.

The crowd of more than 1,000 people was composed primarily of soldiers in military fatigues, the victims’ relatives and government officials.

Officials said the coup attempt had been orchestrated by the region’s head of security, Gen. Asamnew Tsige. General Asamnew was released from prison last year, having been granted amnesty for a similar coup attempt, according to media reports.