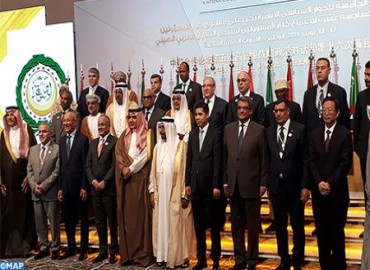 Participants at the 16th session of the China-Arab States Cooperation Forum, held Tuesday in Abu Dhabi, lauded the leadership role and efforts of King Mohammed VI, Chairman of the Al-Quds Committee, in defending the Holy City of Jerusalem and supporting the resistance of its inhabitants.

In the recommendations issued at the end of the 16 session of the Forum and the 5th session of the China-Arab States Strategic Dialogue, participants also praised the actions of Bayt Mal Al Quds Agency, an offshoot of Al Quds Committee.

During the meetings, the two sides exchanged views on major international and regional issues of common concern and agreed to further strengthen coordination and cooperation in various fields, the UAE official news agency WAM reported on Wednesday.

The two parties reviewed all the actions conducted within the Forum since the 8th Ministerial Meeting and expressed satisfaction at the success of the activities planned under the 2018-2020 Executive Program.

Part of the strengthening of environmental cooperation between the two sides, it was agreed to continue discussions on the establishment in Morocco of a Chinese-Arab States Centre to combat desertification.

China and the Arab countries also underlined the need to carry on efforts to deepen dialogue among civilizations. In this connection, they vowed to spare no effort to ensure the success of the 8th Conference on Arab States-China relations and on dialogue between Arab and Chinese Civilizations scheduled in Morocco in 2019.

Wang Di, director-general of the Department of West Asian & North African Affairs at the Chinese Foreign Ministry who co-chaired the meetings with Khalifa Shaheen Al Marar, UAE deputy Foreign Minister, praised the development of Sino-Arab relations and the achievements made in the joint building of the Belt and Road Initiative and the forum on Sino-Arab cooperation.

He said China is willing to strengthen coordination, dialogue, and exchanges with Arab countries, and to pool efforts with them to oppose terrorism and extremism.