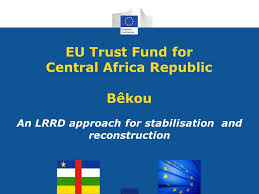 The European Commission announced this Wednesday the extension of the Bêkou Trust Fund for the Central African Republic (CAR) until the end of 2020.

The Bêkou Trust Fund (meaning “hope” in Sango) was created in July 2014 to address the political and security crisis of 2013 in CAR and remains a critical instrument to bridge the gap between humanitarian needs and development in the country and to implement the LRRD approach – ‘Linking Relief, Rehabilitation and Development’.

The trust fund extension comes a few months after the signature of the Peace Agreement between the Government and armed groups in Bangui in February 2019.

According to an EU press release, Commissioner for International Cooperation and Development, Neven Mimica, said: “We are extending the Bêkou Trust Fund for 18 months as it brings real results. The first ever EU Trust Fund has so far already reached over 2.5 million beneficiaries, over half of the population of the Central African Republic,”.

The commissioner added that the fund has improved the lives of lots of people in areas such as health, rural development, reconciliation and economic recovery.

“In a difficult context where our traditional instruments do not deliver fast enough, Bêkou has proven to be an effective tool,” he said, calling on EU Member States and other partners to further contribute to the Bêkou Trust Fund in order to maximize impact on the ground.

Five years after its creation, the Bêkou Trust Fund has already almost quadrupled its resources (from €64 million to €243 million) and has launched 17 programs, which have already provided tangible results for half of the population of the Central African Republic.

In the health sector, which currently represents the main sector of intervention with 42% of the funds, the Bêkou Trust Fund actions restored health services for over 30% of the population.
In the rural development sector, thanks to the food security program, animal vaccination campaigns have been relaunched and the livelihoods of agro-pastoral communities were restored.

Additionally, by the end of 2018, more than 56,000 individuals have already benefited from actions that directly support peace building and conflict prevention.

The EU, France, Germany as well as Switzerland have pledged around €55 million for the extension.