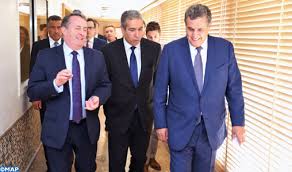 As the United Kingdom braces for a hard Brexit without a deal with the European Union, the British government is looking for business opportunities outside the European bloc, focusing on building stronger economic cooperation ties with its traditional partners in America, Asia and Africa in addition to those of the Commonwealth.

It is in this challenging international context that British secretary of State for International Trade Liam Fox is visiting Morocco wherein he met on Thursday Minister of agriculture and fisheries Aziz Akhannouch.

The two officials expressed their willingness to continue efforts to further enhance cooperation between the two countries in the fields of agriculture and fisheries in the short and medium terms.

Mr.Liam Fox also had talks in Rabat with Secretary of state for Foreign Affairs Mounia Boucetta. “This meeting was an opportunity to review ways to foster cooperation with Morocco in the economic, political and commercial fields, as well as in investment,” Dr. Liam Fox told the press.

“Morocco has a huge potential in a number of sectors, notably agriculture, financial technology and education,” he added, noting that the North African Kingdom has untapped potentials in other areas that will enable the country to grow quickly, create more jobs and become more prosperous.

Fox also expressed his country’s desire to become the largest investor of the G7 in Africa, saying that Morocco is the best gateway to the African continent.

UK Department for international trade describes Morocco as a politically stable, business-friendly country. Though Moroccan economy has traditionally been more aligned to Europe than to Africa, the country is increasingly taking advantage of opportunities across the African continent. This opening up of the Moroccan economy is creating further opportunities for UK firms.

Morocco is increasingly recognized for ease of doing business. It ranks third in Africa and second in the Middle East in the World Bank’s 2019 Ease of Doing Business report, and is the top African investment destination according to the Africa Investment Index 2018. Casablanca Finance City offers support to companies wishing to invest.

Bilateral trade between the UK and Morocco totalled £2.2 billion in 2018. Casablanca Stock Exchange has a partnership with the London Stock Exchange and the British-Moroccan Chamber of Commerce can assist companies new to the market. Morocco is also a popular destination for British tourists.