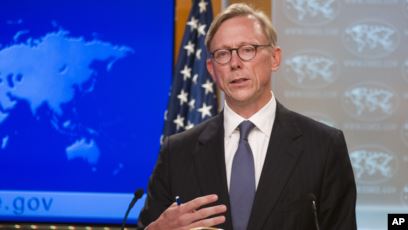 US new strategy weakened Iran- US Representative to Iran

The US has developed a new strategy that aims at hitting Iran’s finances hard in order to obstruct the destructive agenda of the Iranian regime and its proxies in the region, US Special Representative to Iran Brian Hook said in Rabat.

Hook was accompanying President Trump’s son-in law and senior adviser Jared Kushner who is on a visit to Morocco part of a tour that will take him to Jordan, Israel and Europe. The tour is focusing the US peace plan to settle the Israeli-Palestinian conflict.

“The US foreign policy, save the Iranian nuclear deal, gives us more leverage to dissuade Iran from carrying out its regional aggression plots and from supporting Hezbollah and other proxies,” Hook told the official news agency MAP.

Morocco severed ties with Iran last year accusing it and its Hezbollah proxy of offering support and training to the separatist Polisario militias.

“Last march, Hezbollah was compelled in an unprecedented move to seek funding elsewhere after Iran fell short of supporting it due to US sanctions that have hit Iranian revenues,” said Hook.

He said US economic sanctions are putting pressure on the Iranian regime, which had to cut by 28% its military spending, including for the powerful Revolutionary Guard, he said.

“We made Iran face the exorbitant cost of its violent foreign policy,” he said.

“We will continue economic pressure on the Iranian regime until it changes its attitude,” Hook stressed.

He said the Iranian regime has two options on the table: behave like a normal state or face a meltdown of its economy.

Iran is behaving like “an outlaw and rebel regime” and will pay the price as its economy will shrink by 6% with dim future prospects, he said.

Meanwhile the US is reinforcing its military capabilities in the Gulf region to deter any potential Iranian aggression against US interests, Hook said.