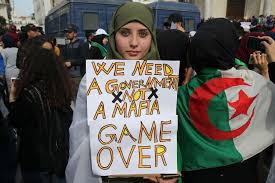 The Algerian Parliament will elect on Tuesday an Interim President after longtime ruler Abdelaziz Bouteflika stepped down last week.

The Tuesday meeting will be headed by Abdelkader Bensalah, the current chairman of the upper house, state-run APS news agency said.

Per the constitution, the two chambers of the assembly will formally confirm vacancy of the presidency after former President Bouteflika succumbed to pressure from the streets and army and stepped down.

The two chambers will elect the interim President and as it stands now, according to the constitution, Bensalah will be elected and tasked to lead a 90-day transition until new elections are held.
However, the tens of thousands of Algerians who have been taking to the street since mid-February, are demanding a change of the entire Bouteflika clan.

During the huge demonstrations staged across the country last Friday, following Bouteflika’s resignation, protesters called for the stepping down of the 3 Bs, namely Abdelkader Bensalah; current Prime Minister Nouredine Bedoui; and Tayeb Belaiz, head of the Constitutional Council; for their connection with the ailing former country ruler.