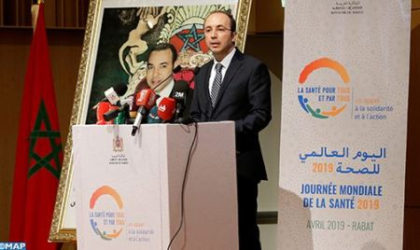 King Mohammed VI has stressed the importance of ensuring a fair and equitable access to health care services in order to achieve sustainable development, social inclusion and cohesion, paving the way for the establishment of universal health coverage by 2030.

In a message to participants marking World Health Day, in Rabat under the theme “Primary health care: a path towards universal health coverage”, the Moroccan Monarch deplored that more than half of the world’s population has no access to primary health care, saying that a universal health coverage does not hinge on funding only, nor should it depend on the sole efforts of the health sector.

This goal can be achieved, irrespective of a country’s level of development, stressed the King in his message read by Health minister, Anass Doukkali.

For this objective to be achieved, a number of basic conditions in the health system need to be met. These include the adoption of a drug policy based on the provision of essential medicines on which priority public health programs depend, in addition to the promotion of locally produced generic drugs and quality medical supplies so as to be autonomous in this regard, explained the Monarch.

In parallel, citizens, especially those with limited incomes, should not have to pay for most of their health care, added the royal message, calling on countries to work more closely together to achieve the objectives of Sustainable Development Goal 3, which insists on ensuring healthy lives and promoting well-being for all, at all ages, by 2030 – a goal Morocco, like the rest of the international community, has pledged to achieve.

According to King Mohammed VI, several priorities need to be taken into account to achieve universal health coverage, such as epidemiological monitoring, addressing cross-border pandemics, ensuring better health systems, contributing to social and economic development and meeting the needs and expectations of the population in terms of health care and related costs.

Primary health care is critical to achieving universal health coverage given the profound changes currently playing out in the world, said the King, noting that this represents a challenge not just for health systems, but also for the funding of health insurance plans, for which solidarity-based health insurance mechanisms need to be adopted to cope with growing health risks and costs.

To ensure effective health insurance plans, the Moroccan Monarch urged all health stakeholders to come up with innovative financing for health care services, especially at this time of rising costs, growing number of ageing population and of chronic diseases.

Reforming the primary health care system should be one of the main pillars of this drive, together with Morocco’s commitment to press ahead with efforts to achieve universal health coverage by 2030, said King Mohammed VI.

Morocco has made significant strides in this field, he affirmed, citing in this regard the measures made to expand health coverage to migrants, occupational groups, students enrolled in higher education institutions, the self-employed and non-earners.