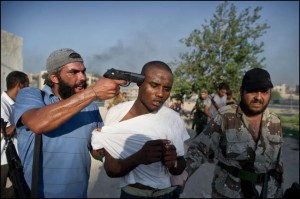 Libyan authorities have reportedly asked the militias operating in Benghazi to help quell the Islamist extremists accused of killing the US ambassador to Tripoli, Chris Stevens, and three members of his staff last week.
According to press reports, the acting president, Mohammed Magarief, and the new prime minister, Mustafa Abou shagour, summoned senior commanders of the Benghazi militias for a meeting in Tripoli to ponder on the attack against the US consulate in Benghazi and try to find out whether it was the deed of local extremists or whether it was ordered by Al-Qaeda affiliated groups operating in the Sahara-Sahel region.
One of the radical, armed Islamic groups that have emerged in Libya since the fall of the Qaddafi regime, dubbed “Ansar al-Sharia”, was pinpointed as responsible of the attack on the US consulate. The group denied involvement in the attack but Libyan officials said at least some of its members conducted the assault that was planned well in advance. Libyan officials also said foreign al-Qaeda members were in Libya and could have played a role in the attack.
Observers have underlined from the start that the assault against the US diplomatic compound, that took place on the anniversary of the 9/11 attacks, was a coordinated and planned action ordered by Al-Qaeda franchise in North Africa.
Actually, Al-Qaeda in the Islamic Maghreb (AQIM) on Tuesday issued a release hailing the US diplomat’s killing and calling for more assassination attempts against US officials.
Commentators are wondering however to what extent Libyan authorities can act against Ansar al-Sharia, as the group is among the most powerful of the many heavily armed militias that the government relies on to keep security in Benghazi.
These militias, which challenge the country’s political leadership, refuse to be integrated into the regular armed forces, and the government, which is still unable to have the whole country under control, relies on them to keep a kind of order in many parts of the country.
If some of these militias or some of their members are responsible for the consulate attack how is the Libyan government expecting them to quell the Islamist militants? The answer may come from the Tripoli meeting between the Libyan officials and the militias commanders.