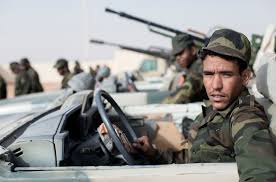 Deserting “captain” of the polisario rallies his motherland, Morocco

A young officer from the Polisario front decided on Monday, March 18, to rally the motherland.

A Polisario rebel executive, claiming to be a captain, acting as deputy commandant of a “Katiba” (battalion) of the so-called Gendarmerie of the separatist front, showed up this Monday morning at the defense line in the area of Farcia (Oued Draa region), declaring his intention to rally his motherland, Morocco, military sources said, according to MAP news agency.

The 29-year-old, who was aboard a multi-colored jeep, said there are still other repentant separatists who want to return to their country, the military source said.

Over the years, many senior executives of the Polisario have returned to their native land after they realized that the separatist front is fooling them with independence dreams that will never come true.

North Africa Post's news desk is composed of journalists and editors, who are constantly working to provide new and accurate stories to NAP readers.
NEWER POSTBouteflika abandoned by his own party’s dignitaries, caciques of his clan
OLDER POSTSouth Africa: Chairman of Central Energy Fund Sacked