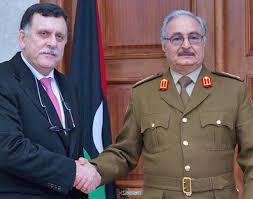 Serraj, who made the announcement one week after meeting his rival Khalifa Haftar in the UAE, did not elaborate on the date.

Serraj who heads the UN-backed Libyan administration met with east-based warlord Haftar last week in the UAE. The two men agreed to hold elections by the end of the 2019.

The Tripoli-based Prime Minister reportedly said he agreed to meet with Haftar in order to stop bloodshed, and reach a plan to spare the country conflict and military escalation.

Haftar’s forces, Libyan National Army (LNA), control the eastern part of the oil-rich country. The LNA extended control over the majority of southern Libya after it launched late last year an operation, it said, was aiming at weeding out terror and gang groups.

The UN has been pushing for elections in Libya to end chaos. A 10 December 2018 timeline set by the UN failed after an escalation in tensions in the lawless country, which has had no central government since the removal and death in 2011 of Muammar Gaddafi.