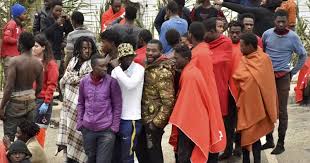 A report submitted by King Mohammed VI, the African leader on migration, won acclaim at the 32nd African Union Summit in Addis Ababa.

The report builds on the momentum ushered by the African Agenda on migration put forward by the King last year and the proposal to set up an African observatory for migration at the AU level, head of the government said on the sidelines of the summit.

The headquarters agreement for the observatory was signed last December by Morocco and the AU in Marrakech.

“My hope is to see the work of this Observatory effectively enhanced through networking with similar institutions in other regions,” the King said in a message to the intergovernmental conference on the global compact on migration held in Marrakech in December.

The report also highlights the significance of the Global Compact on Migration endorsed in Marrakech, said El Othmani.

The report echoes the agenda presented by the King a year ago and corrects a set of fallacies, he said, stressing that migration should not be tackled from a security perspective.

The King had dispelled the myths linked to migration, deconstructing one by one the misconceptions associated with the issue, El Othmani recalled.

“There is no massive influx of migrants, since the latter account for only 3.4 per cent of the world population”, the Sovereign had said in a previous speech.

“African migration is essentially intra-African. Worldwide, migration accounts for less than 14 per cent of the population. As far as Africa is concerned, 4 out of 5 African migrants remain in the Continent,” the Monarch had said, underlining that “migration does not impoverish host countries since 85% of migrants’ incomes remain in those countries.”

The credibility of Morocco’s leadership on migration at the continental level stems from the pioneering migration policy implemented at home wherein migrants especially from Sub-Saharan Africa can apply for residency status gaining access to jobs and social services.