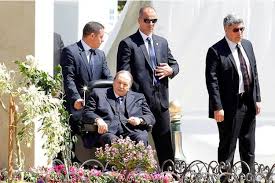 Algeria: Will the Military Intervene ?

With the political crisis deepening in Algeria wherein social anger is mounting and the economic situation is worsening, the struggle for power between the elite generals and the politicians is intensifying as the ailing president Abdelaziz Bouteflika, 81, braces, for a controversial fifth term in office.
Despite the military and security purge carried out lately to get rid of the ambitious top ranks ahead of the upcoming rocky transition, it seems that some of the retired generals have become more and more vocal against Bouteflika’s 5th term plan.
In an interview published by Algerian El Watan daily, retired Gen. Ali Ghediri urged chief of staff, Gen. Ahmed Gaid Salah not allow violation of the Constitution by extending the mandate of the wheelchair-bound president, in power since 1999.
Mr. Bouteflika has rarely appeared in public since suffering a stroke five years ago. His absence has led to speculation over who is really in charge in Algeria.
But the Algerian ministry of Defense warned on Sunday retired officers against getting involved in politics and urged them to abide by the military regulations which ban any member of the army, active or retired, from meddling in political affairs.
Gen. Gaid Salah, the army chief, has said the military should keep away from being entangled in politics, rejecting calls for the army to oversee a transition period during the upcoming presidential election scheduled for spring 2019.
However, nobody is fooled by these remarks regarding the army’s independence. Everybody knows that the Algerian army controls everything from behind the scenes and will never abandon its deeply rooted powers and privileges.
Several influential Algerian personalities including Secretary-General of Algeria’s ruling National Liberation Front (FLN) Djamel Ould Abbes, 84, and Louisa Ighilahriz, a prominent resistance figure, have quitted their jobs in protest against Bouteflika’s plan to run for a fifth term.
“I refuse this because he is not the actual ruler. Other people are ruling in his name,” said Mrs. Ighilahriz. “I do not want to play a role that I no longer believe in. The president is sick and unable to run the country. Members of his close circle are really the ones who are ruling in his name, but they are operating behind the scenes,” she added, referring to the President’s brother and senior aide Saeed Bouteflika and to General Gaid Salah.
Commenting the situation in Algeria, the Financial Times said: “putting an absentee & ailing president up for election at a time the nation is desperate for rejuvenation, the authoritarian regime is delivering a cynical message to Algerian people: that their hopes and frustrations do not matter”.
But with a growing number of senior military officers speaking out and started rattling their sabres, the Algerian army, which does not want to be a visible target of partisan politics, may rethink its stand and take action !.