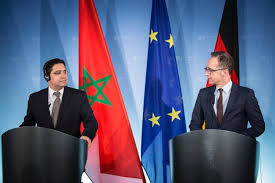 Germany Calls for Constructive Attitude at Round-table on Sahara

Germany has called on stakeholders in the Sahara issue to have a constructive attitude at the round table to be held in Geneva December 5-6.

The call was launched by German Foreign Minister Heiko Maas at the end of talks Thursday in Berlin with his Moroccan peer Nasser Bourita.

The German official stressed the “paramount importance” of the meeting and underlined the need to lay the bases for an integrated regional development and to seize all opportunities to ensure the success of the round-table convened by the UN Secreatry General’s personal envoy for the Sahara Horst Köhler.

The German Foreign Minister, who reiterated his country’s support for the UN process and for Horst Köhler’s efforts, underlined that maintaining the status quo in the Sahara benefits no party.

Analysts have repeatedly sounded the alarm as to the heavy cost of the non-Maghreb for the region, which remains one of the world sub-regions where intra-regional trade is stagnating at 3%, one of the world’s lowest.

The Maghreb Union project, initiated in 1989 by Morocco, Algeria, Tunisia, Libya and Mauritania to promote inter-Maghreban relations on the political, economic, cultural and social scales, has been stalled for years, mainly because of tense relations between the region heavyweights, Morocco and Algeria.

Today little has been achieved to fulfill the union’s initial goals and the Maghreb remains the most separated region on the continent.

The settlement of the Sahara issue would put the Maghreb project back on track and thus enable the region to exploit the huge economic, human and natural resources it harbors and to build up a strong, complementary economy.
That is why maintaining the status quo in the Sahara benefits no party and is harmful to all the countries of the region.