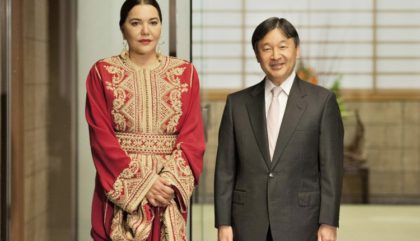 Princess Lalla Hasnaa, Chairwoman of the Mohammed VI Foundation for the Protection of the Environment, was awarded, Tuesday in Kyoto (Japan), the title of Doctor honoris causa by Ritsumeikan University.

During a ceremony at the university campus, attended by several academics and officials, President of the University, Mikio Yoshida, underlined that this honorary degree is a tribute to the considerable efforts and outstanding contribution of Princess Lalla Hasnaa in the field of environment protection, education and sustainable development.

Given her interest in education that should come, according to her, before all other means and considerations to foster children’s awareness to environment protection, Princess Lalla Hasnaa also visited Ritsumeikan primary school, where she was briefed on the innovative pedagogical approach followed in the institution.

The school boast a library of 37,000 books, one of the largest for a primary school in the country, and spaces of discovery and innovation, including a robotics room.

Last Friday, Princess Lalla Hasnaa was awarded in Tokyo the 2018 Goi Peace Award, a prestigious distinction that honors annually a personality or an organization that made outstanding contributions for a peaceful and harmonious world as stated in the Declaration for All Life on Earth.

As Chairwoman of the Mohammed VI Foundation for the Protection of the Environment, Princess Lalla Hasnaa, is thus recognized for her leadership in promoting the protection of the environment and improving people’s quality of life, particularly through education and advocacy for sustainable development.

Actually, Princess Lalla Hasnaa has been involved in activities in the service of Moroccan society, with a particular interest in social, cultural and environmental issues. In 1999, she launched the national campaign to protect the country’s coastline and beaches. To institutionalize this effort, the Mohammed VI Foundation for Environmental Protection was established in 2001, and Princess Lalla Hasnaa was appointed as president.

In this capacity, she initiated various programs and activities for environmental protection and education, and in 2007, she was appointed “Coast Ambassador” by the Euro-Mediterranean Regional Program for the Environment, backed by the United Nations.