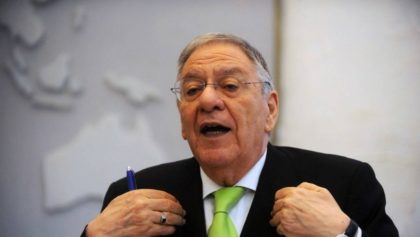 The Secretary-General of Algeria’s ruling National Liberation Front (FLN) Djamel Ould Abbes, 84, has resigned from his post, deepening the political crisis in the North African country wherein political leaders and military generals are fighting for power as the country’s aging and long-serving president is preparing to run for a controversial fifth term in office in 2019.

Algerian State-controlled news agency APS said Ould Abbes left his post due to “health concerns” but many analysts believe his resignation is linked to the power struggle tearing the country.

It is also part of the overall purge carried out by the presidency opaque inner circles to get rid of all political rivals ahead of the upcoming rocking presidential election.

“I refuse this because he is not the actual ruler. Other people are ruling in his name,” she said. “I do not want to play a role that I no longer believe in. The president is sick and unable to run the country. Members of his close circle are really the ones who are ruling in his name, but they are operating behind the scenes,” she added, referring to the President’s brother and senior aide Saeed Bouteflika and to the Chief of Staff Ahmed Gaid Salah.

These two powerful men are suspected to be behind the recent wave of ousting high-profile security officials and Generals, accused of corruption and other wrongdoings.

Last week, five generals were released, a move suggesting there is a renegotiation of civil-military relations in a country on the verge of implosion due to political and economic crisis with a frail presidency.