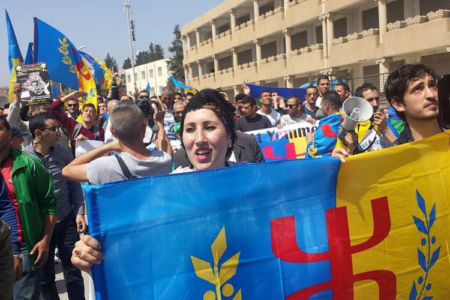 The War of Languages in Algeria Undermines Social Peace 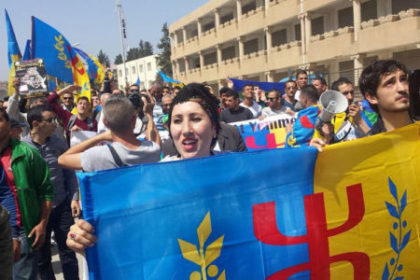 In a sign of a frail social peace, Algeria is on the brink of a new language war as Amazigh population in the Kabylie announced the boycott of the Arabic language at school and in the administration in response to the rejection of their language in other provinces.

Many students in Algerian regions rejected learning the Amazigh language, which has a constitutional status in Algeria.

Such a negative stand towards the Amazigh language (Berber) has pushed large segments of the Kabylie population to announce the boycott of the Arabic language.

In Tizi Ouzzou, several high school students protested at what they considered as a despise of their language by their fellow countrymen holding banners saying “if you refuse Amazigh we will refuse Arabic.”

Last April, the Amazigh in Kabylie took to the streets to demand the independence of the mountainous region on the anniversary of the Berber Spring, marking the bloody crackdown by the Algerian regime in 2001 killing at least 116 protesters.

The 2001 bloody events triggered the birth of a movement for the self-determination of the Kabylie region (known by its French acronym MAK), which continues to gain ground among the Kabyles in Algeria and in France where a large diaspora lives.

The MAK was founded by Ferhat Mhenni, who leads a provisional Kabyle government in exile. The movement identifies itself as a pacifist movement seeking autonomy from Algiers as a prelude to founding an independent Kabylie state.

Human Rights Watch, EuroMed Rights, Amnesty International, and Front Line Defenders have condemned in the strongest terms Algeria’s discrimination against the Amazigh minority and called for dropping all charges against Kamaleddine Fekhar, a leading human rights activist and his 40 co-defendants.