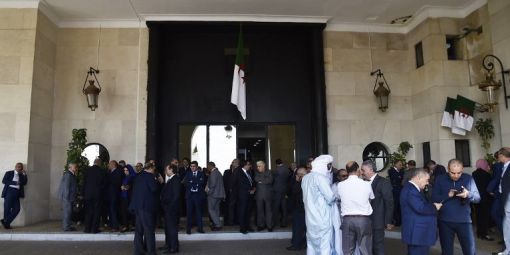 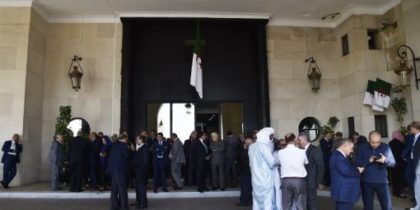 The crisis is deepening in Algeria wherein political leaders and military generals are fighting for power as the country’s aging and long-serving president is preparing to run for an unprecedented and controversial fifth term in office in 2019.

Ahead of the upcoming rocky transition of power amid growing social woes and resentment, some Algerian deputies of major political parties with links to the presidency’s inner circles or military intelligence apparatus are acting to protect their interests.

The struggle for power has reached its peak between Algerian MPs and Speaker of the lower house of Parliament Saïd Bouhadja, member of the ruling party National Liberation Front (FLN) of President Abdelaziz Bouteflika.

Tuesday, about 200 MPs blocked the parliament premises for several hours in a protest move, demanding the resignation of the House speaker.

“We’re here to demand the speaker resigns,” said Abdelhamid Si Affif, chairman of the parliament’s foreign affairs committee, after blocking the entrance with a chain and padlock.

Saïd Bouhadja, 80, is accused by the rebel deputies of “mismanagement, exaggerated and illicit expenses and dubious recruitment”. He refuses to step down and challenges his rivals as Algeria’s constitution and laws do not include a procedure for the impeachment of the lower house speaker who can be replaced only if he dies or is physically incapacitated or if he resigns.

Opposition groups condemned the action carried out Tuesday by the majority parties in the 462-member parliament while Bouhadja continues to cling on to his post as his mandate runs until 2022.

According to political analysts, the crisis, which has led to the paralysis of the legislative institution in a country on the verge of implosion, can be defused only by President Bouteflika by dissolving the parliament and calling for early elections.

But will the president step in to put an end to this imbroglio ? Nobody really knows how this situation will unfold in a country run with an opaque political system wherein the military and the president’s inner circle play powerful roles.

The North African country is witnessing a series of shake-ups in its security apparatus, with personnel reshuffles affecting the upper echelons of the country’s military, police and security forces.

The purge is carried out to reduce the possibility that rogue generals will act to serve their own interests at the expense of the government’s as the president braces for another election mandate.

Bouteflika, 81, is urged to stand for election for a fifth term, a decision that generated mixed feelings within Algeria’s political sphere about whether it would be good or bad for the country.

Most political parties support his fifth term, while some nascent opposition groups have raised Algeria’s economic woes as a reason for embracing new leadership.

In power since 1999, Mr. Bouteflika, has rarely appeared in public since suffering a stroke five years ago. His absence has led to speculation over who is really in charge in Algeria.

If he runs for another term despite uncertainties over his health, analysts believe it would mean that the top ranks of the powerful military and security establishment failed to agree on a successor.

Algerians complain about the erosion of their purchasing power as prices have risen and their currency has depreciated, prompting strikes by Algerians demanding better pay and working conditions.

As to Algeria’s economic liberalization, it remains selective, tightly managed and potentially reversible if oil prices rise or if Bouteflika is no longer president.

Hydrocarbons continue to provide 60 pc of the State’s revenues. The country suffers from youth unemployment (28 pc), deep political crisis and systematic corruption, fueling social turmoil and anger while the Generals continue their lavish spending on defense despite austerity measures.

There is a growing regional and international concern that power struggle unfolding in Algeria may lead to a fresh upsurge of violence that may affect also its neighbors and Southern Mediterranean countries.