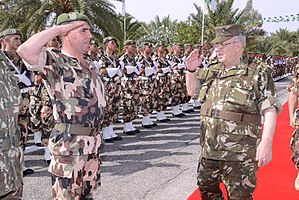 Five top Algerian generals have been dismissed of their functions this week after they stood before justice on corruption charges, local Algerian media said.

They all face charges of “illicit enrichment” and “use of a senior officer’s function for personal purposes.”

The recent dismissals come at a context of a larger purge within the senior levels of the Algerian army as the pro-Bouteflika clans strengthen their stronghold on power.

Last September, a group of top Algerian military commanders, including the heads of the air force and the army, have been dismissed.

Some analysts argued that the purges indicate that the chief of staff Gaid Salah is reordering the military leadership in preparation for exerting more power independent of Bouteflika, especially as the president, who is beset by health problems, grows sicker and weaker.

Despite poor health, President Bouteflika is bracing for a fifth term, encouraged by his entourage including his brother Said and chief of Staff Gaid Salah.

Some analysts say that keeping Bouteflika as a President indicates an agreement among the power elite who run the country.