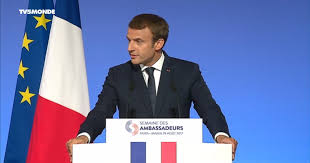 A Summit on the Mediterranean in Marseille in 2019, French President Announces

President Emmanuel Macron of France announced Monday that a summit on the Mediterranean will be held in “the early summer of 2019” in Marseille, south-eastern France, to “find the thread of a Mediterranean policy.”

“Ten years after the Union for the Mediterranean, we must find the thread of a Mediterranean policy,” said the president during his annual speech before the ambassadors of France.

This “indispensable” policy will be “different” and should include “all civil societies”, he said, adding that the summit will be an opportunity to “talk about youth, mobility, energy, university exchanges between the two shores of the Mediterranean…”

President Macron who said “Africa is our Mediterranean neighbor”, pleaded for a “more inclusive” Mediterranean policy that will, he said, undoubtedly help consolidate the Maghreb.

The Union for the Mediterranean, UfM, was launched in 2008, at the initiative of former President Nicolas Sarkozy, by the countries of the European Union and 15 Mediterranean countries from North Africa, the Middle East or southern Europe that are not members of the EU.

Yet, this organization quickly lost its influence, especially in the context of the Arab Spring.

Since his election in May 2017, Emmanuel Macron visited Algeria, Tunisia and Morocco. On Monday, he announced a visit to Egypt “in the coming months”.

In his speech, President Macron also referred to the situation in Libya, saying his country is determined to “make progress” on the Paris agreement providing for the organization of elections in December.

The coming months will be “decisive” as regards a return of stability in the country, he said, insisting that the restoration of Libyan sovereignty and the country’s unity is an essential component of the stabilization of the region.
According to the French President “the Sahel issue will not be solved until the stability of Libya is secured.”

Outlining France’s Africa policy, he said the African continent is ”an ally to invent the great balances of tomorrow” and that “we will never succeed in winning our challenges without Africa”.

In this context, he underlined the strategic bilateral as well as the multilateral importance of France’s relationship with Africa, underscoring that “it is more particularly with Africa that we must re-establish the new contemporary coalitions”.

North Africa Post's news desk is composed of journalists and editors, who are constantly working to provide new and accurate stories to NAP readers.
NEWER POSTCholera Cases in Algeria Rise to 59
OLDER POSTMauritania’s President Wants Opposition out of Parliament