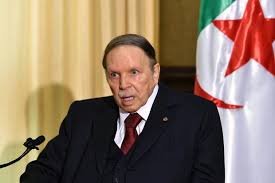 The Financial Times has unveiled the reasons behind the support of the corporate barons of the bid of ailing Algerian President Abdelaziz Bouteflika for a 5th term in office despite uncertainties over his health.

“The businessmen have been one of the biggest interest groups behind Bouteflika, aged 81-year old. All made their money under him,” said Riccardo Fabiani, analyst at Energy Aspects, in a story carried out Thursday by FT.

“There is a risk that if he leaves, anyone can take aim at them. They would be in uncharted territory”, he explained. Bouteflika, in power since 1999, has rarely appeared in public since suffering a stroke five years ago. His absence has led to speculation over who is really in charge in Algeria, underlined the business newspaper.

According to FT, Africa’s largest gas exporter is saddled with an opaque political system wherein the military and Said Bouteflika, the president’s brother, who is known to be close to business circles, play powerful roles.

The UK paper cited in this regard the case of Abdelmadjid Tebboune who was sacked just three months into his term as prime minister. He was dismissed after his call on the country’s entrepreneurs to stop interfering in politics and after he criticized Ali Haddad, the country’s most influential businessman, close to President Bouteflika.

Despite the Algerian President’s ill health, the governing National Liberation Front party has called on Bouteflika to run for a fifth term next year. “If he does, analysts believe it would reflect the inability of cliques within the military and security establishment to agree on a successor”, said the Financial Times.

Algerians complain of the erosion of their purchasing power as prices have risen and their currency has depreciated, underlined the newspaper, recalling the strikes staged this year by thousands of doctors and teachers for better pay and working conditions.

As to Algeria’s economic liberalization, it remains selective, tightly managed and potentially reversible if oil prices rise or if Bouteflika is no longer president, stressed FT.

According to some analysts, the country’s efforts and commitment to diversify its economy will weaken if oil prices continued to rise in the global market.

Hydrocarbons provide 60 pc of the State’s revenues. The country suffers from youth unemployment of 28 pc, deep political crisis and systematic corruption, fueling social turmoil and anger while the Generals continue their lavish spending on defense despite austerity measures.