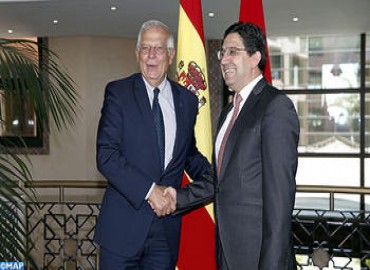 Spanish Minister of Foreign Affairs Josep Borrell hailed on Thursday in Rabat the sound friendship ties and the strategic partnership existing between Morocco and Spain, which are sharing, he said, common history and interests.

The two countries “are not only friends and neighbors, but they are also strategic partners determined to strengthen further their bilateral relations, based on respect, dialogue and mutual trust”, said Borrell after meeting his Moroccan peer Nasser Bourita.

The newly appointed Spanish top diplomat, who made his first overseas trip outside Europe to Morocco, underlined the convergence of views of the two countries regarding several international issues of common interests and voiced his government’s full commitment to deepen and diversify its partnership with Rabat.

According to Josep Borrel, a former Speaker of the European Parliament, Morocco and Spain have succeeded in building a “cooperation model” in very sensitive areas” such as migration and the fight against terrorism.

The Spanish official who recalled the advanced status Morocco has within the European Union, called in this regard for strengthening further relations between Morocco and the EU, saying that Spain will spare no efforts to defend the interests of its neighbor (Morocco) and its major trade partner outside the EU.

Regarding the issue of migration, the Moroccan Foreign Minister said his country rejects any move by the European bloc to set up screening centers for migrants in Morocco and other countries.

Moroccan authorities described such measures as “easy solutions” and “counterproductive”, as the so-called “regional disembarkation platforms” in Africa would not stop the flow of Europe-bound migrants.

Along with Tunisia and Albania, Morocco has been cited among possible locations to host migrants’ centers outside European borders during the EU summit held Thursday in Brussels.

Spain is the third biggest destination for migrants in the European Union after Italy and Greece.