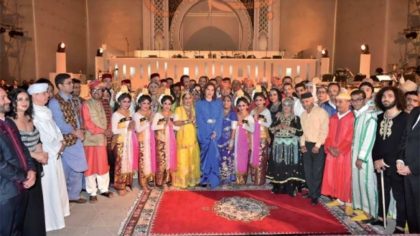 The opening ceremony of the 24th Fez Festival of World Sacred Music was held Friday evening under the chairmanship of Princess Lalla Hasnaa, the youngest sister of King Mohammed VI.

Held this year under the theme: “ancestral knowledge and renewal of the medina of Fez”, the inaugural concert was, through the lyrics and music, reminiscent of the close relationship existing in the City between architecture, crafts, and communities living together harmoniously.

The idea to open the festival with this artistic creation was inspired by the fact that in the Islamic and Arab tradition, artisanal know-how is linked to a divine or prophetic revelation, testifying to the eagerness to integrate crafts to wisdom and to a practical daily spirituality.

Until June 30, the festival of sacred music in Fez will thus reflect the link between an exceptional craft heritage imbued by spirituality and contemporary creations and perpetuate the soul of the ancestral city.

The festival aspires, according to its initiators, to symbolize dialogue between religions and cultures, to invite to reflection and exchanges on this changing world issues.

The festival’s musical program features bands and singers from more than 20 countries.

Like the previous editions, the Festival of World Sacred Music offers an anthology of musical expressions from different traditions and cultures of the world, free concerts to the general public and Sufi evenings as well as other educational activities.

A Forum is also held on the sidelines of the festival from June 23 to 25 with the participation of several scholars, writers and philosophers who will highlight in their debates tolerance and living together through Arts and Music.

Meanwhile, capital Rabat is hosting Mawazine festival from June 22 to 30. The event features some 100 renowned Moroccan, Arab, African and Western singers that will perform on six stages.

The Atlantic city of Essaouira is celebrating the Gnaoua traditional music in its yearly festival, which offers a varied program of the rhythms of the Gnaoua heritage and of global jazz.

The two-day show kicked off Friday with a mesmerizing encounter between the legendary American jazz fusion band Snarky Puppy and the Moroccan Maâlem Gnaoui Hamid El Kasri, who together delighted the festival-goers with fresh and resounding melodies.