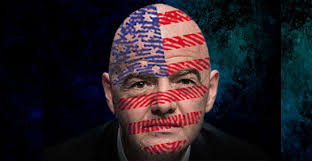 FIFA President Gianni Infantino has once more fell short of upholding neutrality in the race to hosting the 2026 World Cup opposing Morocco to the joint North American bid.

In an interview with Equipe du Jour, Infantino has vindicated the information that he supports the Joint American bid. In a stark breach of neutrality required by his position, he said if the world cup is organized in North America it would generate 10 billion dollars in revenues.

He was speaking ahead of a vote on June 13 that will decide which country will host the tournament.

His statements were seen as prejudging the vote in a blatant partiality that casts doubt over FIFA’s transparency.

“It is difficult in a race when the referee or judge is not impartial,” had El Alamy told reporters in Casablanca.

Morocco has announced that if it won the bid it will invest $15.8 billion in building necessary infrastructure.

The Moroccan bid passed the FIFA taskforce test last week and is now poised to face the North American bid in an open vote on June 13.