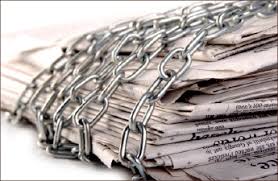 The Committee to Protect Journalists (CPJ) has called on Algerian authorities to respect the freedom of expression and media following the sentencing of Algerian blogger Marzoug Touati to 10 years in prison.

The blogger is accused of “communicating with a foreign entity and inciting civil disobedience”. The heavy-handed judgement comes after Touati made an interview with an Israeli Foreign Ministry spokesman, which the blogger posted to the YouTube page of independent site al-Hogra in January 2017.

“This harsh sentence handed down to Marzoug Touati is a clear attack on press freedom in Algeria and authorities should overturn the conviction on appeal,” said CPJ Advocacy Director Courtney Radsch.

“Algeria must let its journalists operate without interference and report freely as a signal that it supports and is committed to an independent press”, the CPJ official said.
Algerian independent journalists, who criticize government officials and policies, suffer harassment, while publishers, editors, advertisers and journalists face growing pressure.

The Algerian government uses its control over most printing houses and large amounts of public sector advertising to exert undue influence on press outlets and to suffocate the freedom of speech, expression and press.

In its latest report on human rights in the world, US State Department denounced restrictions imposed by Algerian authorities on the freedom of the press, assembly and association.

Amnesty International, Human Rights Watch and other NGOs have also condemned on several occasions the systematic violations of freedom of speech, assembly & association despite constitutional amendments guaranteeing these rights.

They have decried the prosecution in Algeria of peaceful critics, including human rights defenders, in unfair trials, and the forced closure of media outlets.

In 2016, Mohamed Tamalt, a freelance journalist with dual Algerian and British nationality, was given a two-year prison sentence for a video he posted on Facebook featuring a poem deemed offensive to Algeria’s president.

Tamalt died in prison after staging a hunger strike to protest his conviction. Authorities denied mistreatment, but his family insisted that negligence or mistreatment contributed to his death.