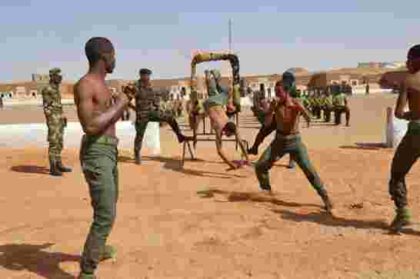 Algerian daily «Algérie Times » confirmed that Polisario militiamen are trained in the Tunnel War, under the supervision of military experts of the Iran-backed Chiite Hezbollah.

The Polisario militias receive from Lebanese Hezbollah military experts continuous training in tunnels, dug under the Moroccan defense wall, in anticipation of the resumption of hostilities against Morocco, the Algerian daily stated in a story on its website.

Morocco revealed Tuesday that Hezbollah was arming and training the Algeria-backed Polisario and announced its decision to cut diplomatic ties with Iran, Hezbollah’s Godfather. Morocco has decided to sever its diplomatic relations with Iran in protest against the military support provided by the Iranian-backed Hezbollah group to the Polisario separatists.

Morocco also revealed that Hezbollah, with support from Iran’s embassy in Algiers, channels to the Polisario surface-to-air missiles including SAM9, SAM22 and Strela, obviously with the consent of Algeria.

The training operation, currently overseen by Hezbollah, an ally of the Iranian mullahs, is reportedly taking place under tunnels dug recently on the west side of the Moroccan defense system, Algérie Times stated.

“The Polisario Front is working tirelessly and at a very high rate to implement this infernal plan placed under the code name “Umbrella of Resistance”, like the plan Hezbollah developed and implemented during the 2006 war against Israel”, added the daily.

“This is a new guerrilla method but that has already proven its efficiency against the greatest power in the Middle East, in this case Tsahel’s army, in Israel,” warns the daily, affirming that “Hezbollah guerrilla experts have personally trained Polisario militiamen in the digging and preservation of these tunnels”.

The transfer of this new guerrilla technique would never have been possible without the blessing and the military assistance of the Algerian army staff, headed by Lt general Gaid Salah, whose anti-Moroccan hostility is well established.

According to “Algérie Times”, Gaïd Salah supervised this operation in person and ordered the expansion of the tunnel network, to use some sections as warehouses for storing weapons and ammunition, in anticipation of the resumption of hostilities against Morocco.

These new revelations about the presence of Hezbollah military officials in Algeria and their training of Polisario separatists on urban warfare confirm once more that hostility to Morocco has become Algiers’ doctrine.