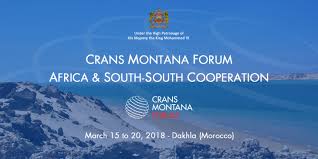 The Pearle of the Moroccan Sahara, Dakhla, is hosting for the fourth time the Crans Montana Forum which brings together African and world leaders to discuss means to promote south-south cooperation in the continent.

Over 1,000 guests and senior officials representing more than 100 countries are partaking in the event to exchange ideas on sustainable development, South-South cooperation and Africa’s different challenges in the era of globalization.

The event was marked by a Royal message expressing Morocco’s commitment to a truly innovative South-South cooperation model based on the exchange of knowledge, skills, expertise and resources.

The message also highlighted Morocco’s active engagement in Africa as evidenced by the 1000 cooperation agreements that were signed in the last 15 years with 28 African countries covering diverse sectors such as education, health, infrastructure development, training and agriculture.

King Mohammed VI also recalled that Morocco advocates a South-South cooperation that has a bearing on issues relating to stability and development in Africa, including migration.

In this regard, the king- in his capacity as the African Union Leader on the Question of Migration- said that he had proposed, at the 30th AU Summit, “an African Agenda on Migration,” which recommends the setting up of an African Migration Observatory and the appointment of an AU Special Envoy for Migration in order to tackle the migration phenomenon properly from a comprehensive perspective.

“Migration is an opportunity, not a threat,” reiterated The Moroccan King, stressing that “the migration-related crisis the world is witnessing today is not new; nor should it be perceived as inevitable. It calls for greater cooperation, first between African countries, then between the latter and the countries of the North.”

Climate change is another priority issue for Morocco’s cooperation in Africa. The Royal message reaffirmed the need for urgent measures in terms of adaptation and mitigation to counter the effects of climate change in line with the COP22 recommendations and the Paris Agreement.

“I availed myself of the opportunity of the global climate meeting to convene the first Africa Action Summit, which was attended by Heads of State and Government of 41 African sister nations. We were thus able to exchange on the challenges relating to the climate change consequences we are facing and agreed on urgent, practical measures to tackle those effects,” said the King.

In the same vein, the Kingdom expressed its willingness to share its successful experience in the promotion of clean, renewable energy, the development of responsible agriculture and the sustainable use of marine resources, underlined the king.

The Crans Montana Forum is attended by former Heads of State and government, ministers, presidents of parliaments, policymakers, MPs and international experts.

Former French President Nicolas Sarkozy is among the guests of Dakhla. In a live interview at the opening session of the Forum, Sarkozy commended Morocco’s rising role in Africa following its return to the African Union.

In a statement to the press on the sidelines of the event, President of the Anna Lindh Foundation, Élisabeth Guigou said that Morocco’s return to the African Union is the fruit of the leadership of King Mohammed VI.

Concerning the Sahara issue, she said that Morocco’s autonomy initiative offers a basis for a lasting solution to this conflict.

North Africa Post's news desk is composed of journalists and editors, who are constantly working to provide new and accurate stories to NAP readers.
NEWER POSTCelebration of 12th Anniversary of Launch of Eco-Schools Program in Morocco
OLDER POSTMorocco to Spend $15.8 billion if it Wins 2026 World Cup Bid