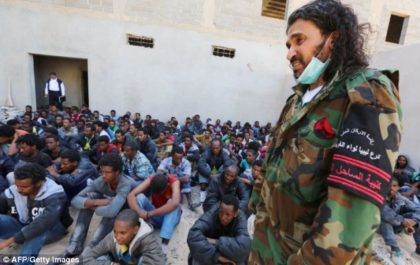 Libya has issued 205 warrants for the arrest of Libyans and foreigners suspected of being involved in a smuggling networks sending illegal migrants to Europe.

The investigations into smuggling networks are being carried out in conjunction with the Italian prosecutor’s office after a joint unit – pooling intelligence, coastguard and justice resources – was set up last year by the two countries.

The director of the attorney general’s investigations office, Seddik al-Sour, said many immigration department officials had been found to be involved.

“There are 205 warrants against the persons who organized the illegal immigration and the human trafficking, and the torture, the killing and the rapes,” he said.

His office had detected a direct link between smugglers and the Islamic State group, he added.

In 2017, about 119,000 migrants and refugees arrived in Italy from across the Mediterranean and, according to the International Organization for Migration, more than 3,100 died making the crossing.

In 2016, 181,000 made it to Italy. Migration was a key issue in the country’s recent election campaign, where major parties have said Italy can no longer accept such high numbers and called for hundreds of thousands of migrants already in the country to be sent home.

Libya is a hotbed for human traffickers, whose networks thrived due to the chaos prevailing in the North African country since the fall of the regime of former ruler Muammar Gaddafi in 2011.

According to Amnesty International, hundreds of thousands of refugees and migrants trapped in Libya are at the mercy of Libyan authorities, militias, armed groups and smugglers often working seamlessly together for financial gain.

Tens of thousands are held in overcrowded detention centers, suffering abuse, ill-treatment and even slavery.