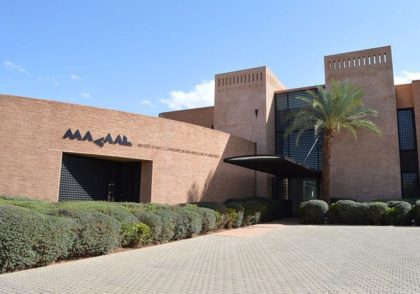 Morocco’s top tourist attraction, Marrakech, is gradually becoming a key stop on the art market’s destinations with the holding of the renowned African art fair, 1:54, the Museum of African Contemporary Art Al Maaden (Macaal) this month, said The Independent.

In an article that highlights facets of the city’s art fairs, the paper described the Red City as witnessing a “contemporary art revolution” that has actually been brewing for years behind the implacable facades of the medina Riads and in the stark, modern buildings of the dusty suburbs.

The paper said that Marrakech is offering a showcase platform of African art. “After raising the profile of African artists overseas, our long-term ambition was always to bring the focus back to the continent, so we could create a solid base on African soil,” The Independent said quoting Touria El Glaoui, the founder of 1:54, which runs alongside the Frieze art fair in both London and New York.

“Marrakech was an important art hub long before Cape Town, partly because it attracted so many creative people like Yves Saint Laurent from Europe. But now we want to attract African artists from our continent,” the paper quotes a local art lover as saying.

The British newspaper also shed light on the “glittering Musée Yves Saint Laurent,” saying that this edifice, which opened late last year, bolsters the colorful contemporary art fairs and exhibitions in the city attracting a new kind of visitors to Marrakech – one that looks beyond the heady, incense-laded souks that speak so heavily of Morocco’s past, towards its future as one of the loudest voices in the African art world.